Sleep, as many of us know, is “a condition of body and mind such as that which typically recurs for several hours every night, in which the nervous system is relatively inactive, the eyes closed, the postural muscles relaxed, and consciousness practically suspended.” But just going to sleep is one thing, while maintaining good sleep health is another. That’s why it’s extremely important for one to keep himself/herself on a regulated schedule – if he/she hasn’t already – and implement helpful changes into his/her everyday life. 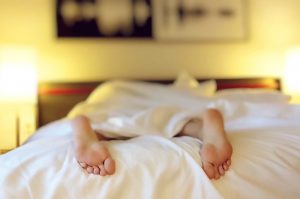 In turn, keeping a schedule ensures that an individual is getting an adequate amount of rest and that he/she is able to feel as though he/she has the following morning. If one hasn’t then he/she will more than likely feel groggy – and/or drowsy. Several health issues may even arise if a lack of sleep takes over for a prolonged amount of time. As a result, each person can make the decision on what time he/she should go to bed based on his/her schedule, but doing so is a lifestyle, rather than a one-time thing if one wants to put healthy sleeping habits into practice. This, however, doesn’t involve just going to bed at the same time every night but waking up around the same time as well.

Two other factors that should be considered are lighting and temperature. First and foremost is lighting which is significant because being subject to bright light, and/or devices, can cause one’s circadian rhythm to be knocked off balance. Fortunately, turning off the lights, and all forms of technology before bed, can allow the person to fall asleep with ease, and help his/her sleep schedule to stay regulated. Then there’s temperature which can be a leading cause for some as to why they are unable to sleep because the room may either be too hot or too cold. Reestablishing this can make all the difference.

In conclusion, maintaining one’s sleep health is essential since his/her sleeping habits oftentimes overlap with – and/or pools into – other areas of his/her life. But when one rests properly he/she will not only feel better physically but mentally as well, which will aid in his/her overall health. But if one has implemented changes into the way he/she sleeps, and is still having difficulty doing so, seeking out the advice of a medical professional can help him/her to better assess the situation, and figure out the underlying cause.